EchoStar, a global satellite communication solutions provider, in its fourth quarter earnings call on Tuesday said that it is set to offer 4G backhaul solutions to Reliance Jio in seven states across India. The development was shared by Pradman Kaul, president of Hughes Network Systems, a wholly owned subsidiary of EchoStar engaged in the high-speed satellite internet services. In September, 2018, Hughes Communications India said that Reliance Jio had picked its Jupiter System to “enable satellite connectivity to more than 400 4G LTE sites in remote and rural locations” across India.

Pratho Banerjee, president of Hughes Communications India, a subsidiary of Hughes Network Systems in September, 2018, said that “satellite is the ideal technology for extending 4G LTE service to remote and rural communities.”

It was said that Hughes India will also offer “managed service to include network planning, implementation, operation and maintenance” as part of its agreement with Jio.

Kaul on Tuesday said that the company received additional orders to deliver more Very Small Aperture Terminal (VSAT) for the BharatNet program apart from the orders it received from Jio.

“We received expansion orders from Reliance Jio to provide 4G backhaul services in seven states and to add more than 600 VSATs as part of the BharatNet program to connect villages across the country,” Kaul said in the earnings call on Tuesday.

Further, Kaul said that the company received orders to connect 4000 ATMs across India.

“We received an order to implement more than 4000 ATMs in support of the State Bank of India,” Kaul said. “The new order brings our total to more than 50,000 ATMs being serviced in India.”

Meanwhile, Kaul said that the company is expecting to receive regulatory government approvals for its joint venture with Bharti Airtel by mid 2021.

Hughes Communications India and Airtel in early 2019, announced an agreement to combine their VSAT operations in India. In a release, the companies highlighted that the “combined entity will bring greater scale, operational efficiencies and market reach to serve India.” It was said that the combined entity will continue to serve its existing users while also “focusing on serving the growing networking needs of enterprise and government” users in India.

It also has to be noted that Hughes Network Systems in July, 2020, joined a consortium led by the government of United Kingdom and Bharti Enterprises to acquire OneWeb. Hughes initially said that it will invest US$50 million in principle into OneWeb, the Low Earth Orbit satellite operator that had then launched 74 satellites. However, Hughes has since “expanded” its role with OneWeb with the company now set to produce the “gateway electronics and the core module that will be used in every user terminal.” OneWeb on its part has “resumed deployment of its broadband satellite constellation” with the operator launching 36 satellites on December 18, 2020.

“We are a service provider all over the world and in the different service offerings that we have we expect to be leasing depending on the market requirements some capacity from OneWeb and bundling it into the other services we offer to our existing customers and new customers,” Kaul said.

The Hughes president said that in “approximately two years” the company would be ready to offer the bundled services to its users in India.

Click here to read the original article published by TelecomTalk.

Hughes India to Offer Satellite Internet for MSMEs from April 2022 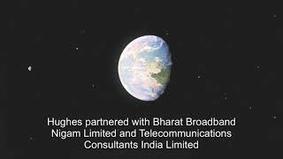