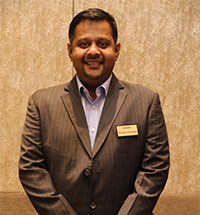 He is a gold medallist in computer engineering from Pune University. Subsequently, he completed his post-graduation in marketing from NMIMS in Mumbai. He has spent more than 18-years of his career at Hughes during which time he has won several sales and marketing accolades, including three awards as the International Marketing Person of the Year at Hughes Network System USA. In January of 2012, he was also awarded “Hughes CEO’s Honor Award” which recognized his achievements globally.

Having begun his career at Hughes as an Account Manager in 1997, he has grown to head the Enterprise Business Division and has spearheaded many achievements for Hughes and in the VSAT industry in India. His areas of expertise include satellite communications, broadband networking and business solutions- across diverse industry segments-with many firsts in the areas of Digital Cinema, e-Governance, Banking and Distance education.